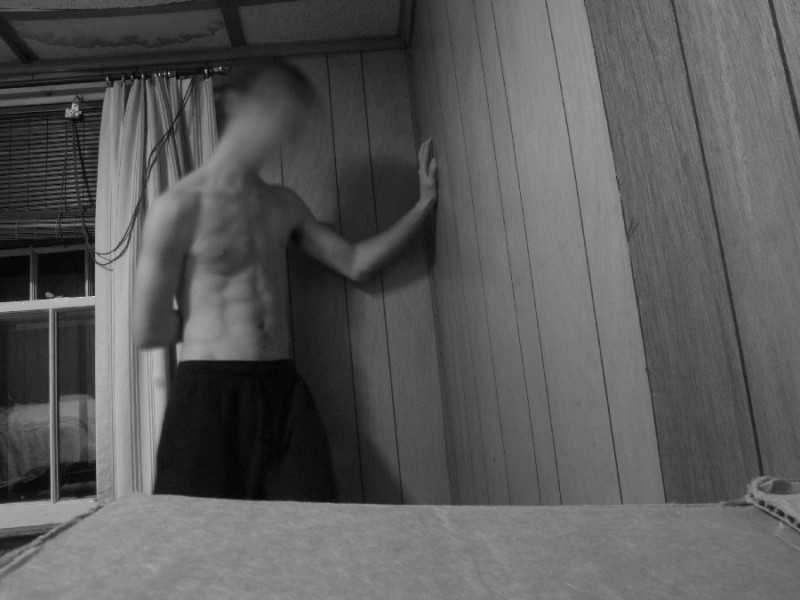 The numbers series I decided to end, it's giving way to another introspective series, the Pale Man series. It's a story, so stick around and read it. I haven't shot digital in a while so I decided to give digital a chance again. Personally I feel the shot is lacking, it needs a bit more contrast and a bit more grain. But, alas, I'm still stuck on a borrowed dinosaur of a PC with no imaging software.

Numbers drift through the breeze carrying dandelion seeds on their back. The age of reason is behind us, the numbers have passed. Haiku remains in the deep power of the orange peel sky, however, and you remember resting against the Pale Man with all of your feminine weakness and holding him up with all of your feminine strength. His soul is bare to the world and barren in its emptiness, face hidden by the blur of thought.

The Pale Man pushes against the wall, he feels it press back, press, press, press against his hand as the hand of you, his lover, presses the sky as you are lifted in your moments of heat and orgasm. There is naught to keep you from floating and naught to keep you tied down except the men who are tracking the Pale Man. They have been chasing him for eight weeks now on order of the Thirty-Seventh Red Queen. She wants him captured, taken, stolen, spun into a cloak of poetry to be worn by her at night as she rests by the fire. He will not have it. You consider floating away in your lucid Ecstasy with the numbers and leaving the Pale Man with nothing but his wits and his haiku. But you realize, you with the deep blue eyes and the dark, night shining hair that wraps around his fingers in the afterglow of sex, you know that you cannot leave him. You must stay with him, you must protect him for he cannot protect himself.

A red pigeon flies through the sound barrier and you both snap awake. It is coming for him, for the Pale Man. The Pale Man is standing over you, his head blurred and his lips move beneath the blur, forming words, letters, lines of a poem. It is a poem not meant for you to hear, the words are archaic, not meant for your ears. You can't help but listen and, as your ear drums rupture, you are conscious of the pigeon exploding into a shower of mach 1.2 blood and feathers as it collides with a wall of words suspended, silently, in the sea soaked skies above the tattered tent you share with him. He looks down at you with his blur and you know you must leave. As he packs up the tent he kisses you and in his kiss you can taste a poem:

16.
Thirty six stop line
twenty fourth stop: suicide-
save a seat for me.

paul, i like the idea of the face hidden by the blur of thought, and how it might relate to identity, searching thought in some ways being the antithesis of actually finding or being ... ? anyway, interesting and thought provoking as always, thanks!

Thought provoking as always. Dynamic photo, and excellent writing. I don't know but looking at this I see martial art undertones - facelessness, shadow-boxing-like-stance etc. - as well as seemingly cryptic references to this style in the writing. Nice work.

@Chris Sullivan: Ah, what a keen eye you have.

Lovely. Although I'm not sure lovely's a word I should use with an image which is bordering on 'Lynchian'. The writing is top notch and nothing less from what I've come to expect from you Paul. It initially brought Dylan to mind. Not so much his songs but his liner notes to his albums 1961-1966. They were obviously inspired in turn by the Beats, specifically Ginsberg. Personally I love Bob, and the beats, and this certainly strung a chord with me. Bravo.

@Duncan Galbraith: Dylan, Ginsberg, Kerouac, and all the other beat generation poets, authors, and singer-songwriters have been highly influential to my photography work and my writing. I guess it's because I can relate to them, I lead a transient lifestyle, one that's quite wide open...I'm not a stranger to being broke with nowhere to go and only a few gallons of gas left in the tank. And, thus, I channel all of that into my writing, granted, in this case it was in a somewhat fanciful way, but it's still all in there. And thanks for all of your support.